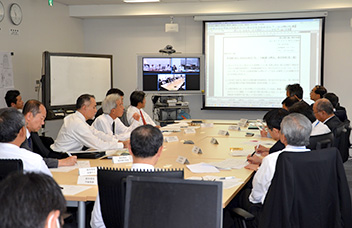 Scene of Tabletop Drill;
the drill was held via videoconference among MOL Liner (HKG), the ship management company (HKG) and the Emergency Control Headquarters. 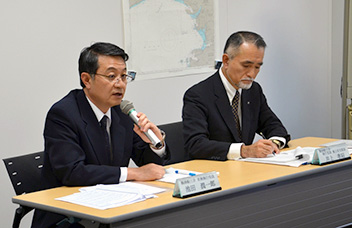 The drill was held on Thursday, May 16, with aim to further strengthening MOL's emergency response structure, which is based on the MOL Group Corporate Principles − protecting the environment by maintaining strict, safe operations, and navigation standards. The exercise also was designed to ensure the smooth, precise communications that are so critical in the event of a marine incident, involving an MOL-operated containership in which containers and hazardous objects or materials go overboard and a fire breaks out.

The drill scenario was that the containership, which was under way toward Port of Kobe, collided with a coastal freighter in Osaka Bay, which was also under way in the bay. The collision caused containers and hazardous objects on the vessel gone overboard and a fire broken out on the deck.

The scenario began with a report from the containership. MOL immediately reported the incident to the 5th Regional Coast Guard Headquarters. MOL then organized an Emergency Control Headquarters within the company, took first-response tasks and procedures that included information gathering, communications among the concerned parties, and directions and instructions to the vessel, and held a joint media response drill.

The company continues to sharpen its group-wide emergency response readiness by sharing know-how accumulated in these training sessions throughout the MOL Group and its fleet.