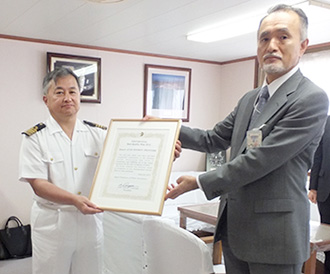 On July 17, President Muto and Managing Executive Officer Takaaki Inoue visited one of the four award-winning ships, the Energy Frontier, to congratulate the officers and crew. All executives and vessel officers renewed their determination to establish a stronger safe operation system.

After the ceremony, President Muto exchanged opinions with the Captain Gaku Hinata and Chief Engineer Kei Yoshimi. The captain and chief engineer, who play active roles on the forefront of safe operation, discussed safety issues and proposals from their front-line perspective to reaffirm the importance of safety.

MOL positions safe operation as its social mission and highest priority issue, and is unified in a variety of initiatives as it "forges ahead to become the world leader in safe operation." The company conducts ongoing activities that contribute to marine safety and global environmental protection as a corporate entity that grows sustainably with society. 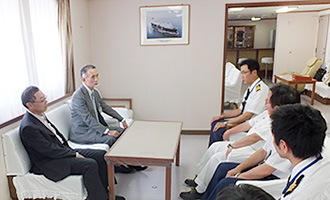