Launched in 2016 by NOAA's Channel Islands National Marine Sanctuary, Santa Barbara County Air Pollution Control District, Ventura County Air Pollution Control District, National Marine Sanctuary Foundation and Volgenau Foundation, the VSR program is a voluntary program that incentivizes containerships to slow down to speed at or below 12 knots, thereby reducing air pollution and enhancing protection of endangered whales in the Santa Barbara Channel. According to NOAA, ten shipping companies, including MOL, participated in the 2016 program. The program reduced more than 27 tons of emissions of nitrogen oxides (NOx), a smog-forming air pollutants, and more than 1,000 metric tons of greenhouse gases.

This is the first year that MOL received this distinguished award. Specifically, the award was presented for MOL's participation and efforts in maintaining the vessel speed at or below 12 knots when transiting the Santa Barbara Channel area as part of MOL's SE2 service.

"Being recognized with this award is an honor for MOL. As one of the world's leading multi-modal transport groups, MOL is committed to protecting the health of our marine/global environment," said Richard Craig, President and CEO of MOL (America) Inc. "We will continue to offer more environmentally-friendly services through various green innovation strategies for bluer oceans, a cleaner environment and a sustainable future so that our customers can count on us." 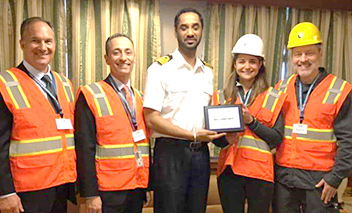 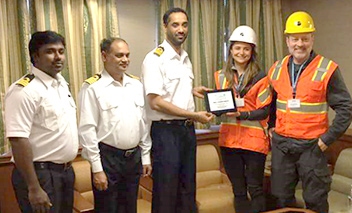