The Serenity Ace arrived at 6:54 a.m. and set sail at 15:30 the afternoon of the same day. It will call at several loading ports in Japan and South Korea, and is scheduled to arrive at the Port of Auckland around August 18.

The company shared scenes of the used car loading operations with government officials, media, and port and harbor authorities, and MOL and other consortium members made a study about the significance of this demonstration project and future issues to be addressed to ensure effective commercialization. 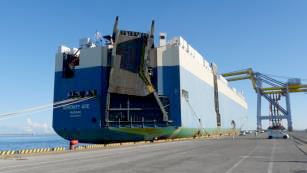 Car carrier Serenity Ace in the Port of Naha