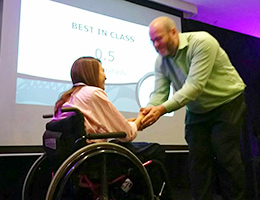 At the award ceremony

TOKYO-Mitsui O.S.K. Lines, Ltd. today announced that Kae Kurahashi, an employee in its Human Resources Division, was named a Most Valuable Player (MVP) in the 2017 Asia-Oceania Zone Championship, held August 27-31 in New Zealand, as a member of Japan's national wheelchair rugby (*) team.

Wheelchair rugby players are classified in seven stages from 0.5 to 3.5 points in 0.5 point increments depending on their level of disability. Kurahashi was selected as the MVP in the "0.5" point classification.

MOL will help further expand wheelchair rugby and foster an environment that encourages its diverse employees to play active roles inside and outside the company.

(*) About Wheelchair Rugby
Wheelchair rugby is a team sport for athletes who have disabilities requiring them to use wheelchairs. This is the only sport in the Paralympic Games that permits contact between wheelchairs. Players are allotted from 0.5 to 3.5 points depending on their level of disability. Under this system, the total points of four players on the court must be within 8.0 points. The wheelchairs used in the game are reinforced to make them durable enough to withstand extreme contact, and modified for players in different positions.