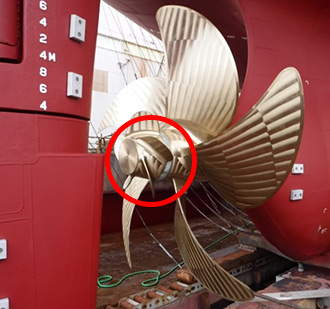 The PBCF, which is a device that improves propeller efficiency by breaking up the hub vortex generated behind the rotating propeller and offers an energy savings of around 3-5% compared to similar vessels not equipped with the PBCF, was co-developed by MOL, West Japan Fluid Engineering Laboratory Co., Ltd., and Nakashima Propeller Co., Ltd. (called Mikado Propeller Co., Ltd. at the time), and is being sold by MOL Techno-Trade, Ltd. The PBCF has been sold for more than 3,200 vessels all over the world since 1987, when it started sales of the conventional PBCF. In May, 2017, MOL announced a new type of PBCF, jointly developed by MOL, MOL Techno-Trade and Akishima Laboratories (Mitsui Zosen) Inc.(Note 1) which shows more energy-saving efficiency than conventional one.

In January, 2017, the PBCF was selected as a technology to reduce underwater noise by the EcoAction Program implemented by the Port of Vancouver, Canada. Since then, the port started offering discounted harbor dues to vessels equipped with the PBCF.(Note 2) This reflects the maritime community's high regard for the PBCF's contribution to environmental protection.

The MOL Group continually develops and expands its environment and emission-free businesses and promotes environmental conservation in ports and at sea all over the world, and will step up its efforts to ensure safe operation and reduce environmental impact through the "ISHIN NEXT - MOL SMART SHIP Project"(Note 3).