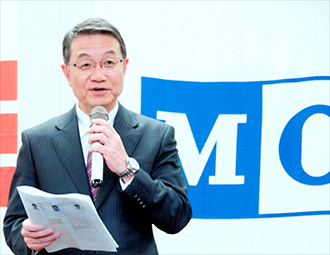 The awards are intended to recognize the ongoing safety-related contributions of MOL Group officers and engineers and recognize their key role, in cooperation with fellow seafarers and ship management companies, in ensuring the safe operation of vessels. The recipients share a commitment to the education and training of younger seafarers, an exemplary attitude in their on board work, and years of success in ensuring the safety of the MOL Group fleet.

This year's ceremony honored a total of six officers and engineers from the Philippines, India, Croatia, and Russia. With their families in attendance, they received commemorative plaques and other prizes from the MOL President & CEO Junichiro Ikeda, who expressed his gratitude for their contributions to safe operation over many years and urged them to motivate younger crewmembers toward similar successes, saying: "Please train young crewmembers, while exhorting them to remember the importance of safe operation, to help us reach our goal of becoming a world leader in safe operation." In addition, he expressed his thanks to the recipients' family members who were at the ceremony for their daily support, which allowed the recipients to focus on their work onboard and ensure safe operation in the MOL Group.

The ceremony has been held every year since 2008, and to date 74 dedicated mariners have received the award. MOL strives to improve safety awareness and cultivate skilled seafarers by recognizing and giving prominence to role models such as the award recipients.