Creating the Technology that Will Lead to Autonomous Ships in the Future; Research Slated for Ferry in Service in Seto Inland Sea
- MOL, Rolls-Royce to Jointly Research Intelligence Awareness System (IAS) -

MOL is targeting safer and more efficient vessels operation and takes a proactive stance on research and development of autonomous ships. This joint project uses Rolls-Royce's IAS, which can be an underlying technology, and the IAS will be installed on a ferry in service.

The technology will be used in new sensors for nautical instruments such as ship radar. The goal of the project is that it allows detection of ships sailing nearby as well as obstacles by integration and analysis of the data obtained, and swift provision of accurate ship operation support information to officers onboard immediately. And, in the future, by integrating data such as weather and route information in the sea area where the ship is in operation, the AI system can detect obstacles with greater accuracy and draw upon advanced ergonomics to provide a more effective user interface for crewmembers. The companies believe this system will help to create the fundamental technology for autonomous navigation, an area where MOL is focusing on as it strives for continual advances in operating safety and efficiency.

The IAS will be conducted on a ferry in service in the Seto Naikai Inland Sea, operated by MOL-Group Ferry Sunflower Limited (President: Atsushi Igaki; Head Office: Kobe-shi, Hyogo Prefecture). The Inland Sea is one of the world's most congested sea areas. MOL and Rolls-Royce will jointly collect and analyze data on marine currents, vessel traffic congestion, and other conditions in the area to promote practical application and research of the system.

MOL continually promotes its R&D project, "ISHIN NEXT - MOL SMART SHIP PROJECT -", and takes a proactive stance in moving ahead to develop and introduce technologies that will contribute to reducing environmental impact and ensuring safe, reliable transport services.

Images of IAS in use 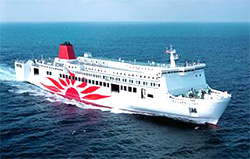 The ferry used in the experiment