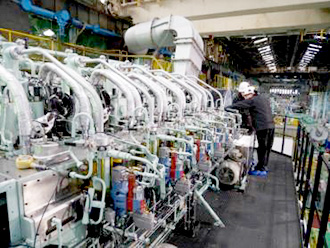 The pilot engine for MDT, manufactured by Makita Corporation, (*) is the first to adopt the MAN B&W 2 Cycle engine. Makita Corporation manufactures and sells small-displacement engines through sub-license agreement with Mitsui Engineering & Shipbuilding Co., Ltd., a licensee of MDT.

The system can inject fuel oil from fuel valves that incorporate solenoid valves, at the optimal timing, with the optimal volume, and in the optimal pattern to maximize engine output, by increasing the fuel oil pressure to 1,000 bars with an electric pump, and storing the fuel oil at high pressure in the common rail pipe. The system also uses hydraulic pressure, instead of the conventional camshaft, to operate the exhaust valves allowing for electronic control and enabling the valves to open and close more freely. This makes fuel consumption more efficiently even in low road ranges. Tests confirm that the system can reduce fuel consumption, especially in part load, compared to an electronically controlled "6S35ME-B" engine of the same displacement.

In addition, the system's simple configuration is expected to reduce operation and maintenance costs, minimizing costs over the entire life cycle of the engine.

In the future, MDT is considering that the system can be adopted on main engines that use alternative fuels other than heavy oil, which allows a flexible response to environmental issues such as global warming and stricter international regulations on exhaust emissions from vessels.

The MOL Group has moved ahead with its technology development initiative, the "ISHIN NEXT -MOL SMART SHIP PROJECT-," and continually takes a proactive stance in the development and introduction of various technologies that will help reduce the environmental impact of its activities. 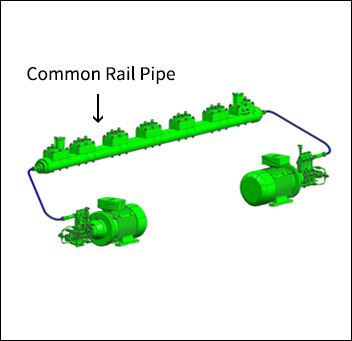