HICT is the first terminal in Northern Vietnam with a berth deep enough to allow calls by 14,000TEU containerships. It will meet customer demands for shorter transit times and lower transport costs, while contributing to economic growth in Northern Vietnam, including Haiphong industrial park, since large-size container vessels, which offer direct links to Asia and North America/Europe, can call at the port. In addition, MOL participates in the tugboat business at Lach Huyen Port, so it will meet expanding demand for HICT by supporting the large containerships that will call with increasing frequency, while ensuring safe vessel operation.

The opening of the terminal means the opening of Lach Huyen Port itself. The Lach Huyen Port construction project is the first Public Private Partnership (PPP) between the government of Japan and Vietnam. Backed by Yen Loan from Japan, the Vietnamese government has been constructing various infrastructure projects such as reclamation, levee protection, a groin and breakwater, causeway and access road between the port and Cat Hai Island. HICT, as a private business entity in which MOL invests, rents space to operate the container terminal.

The MOL Group opened Tan Cang - Cai Mep International Terminal (MOL's contribution: 21.33%) at Cai Mep Port in Southern Vietnam in 2011, and has been focusing on infrastructure development in Vietnam. In Northern Vietnam, the group is already expanding its logistics business operations such as customs clearance, warehousing, and inland transport, and a container depot business in the Haiphong area. With the newly opened terminal, MOL group has further expanded its presence in Northern Vietnam, which is expected to show significant development and growth in the future. The MOL Group continually provides stress-free services to meet customer needs throughout Vietnam. 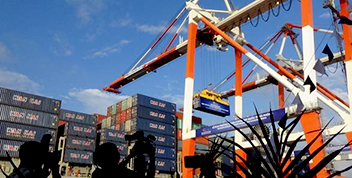 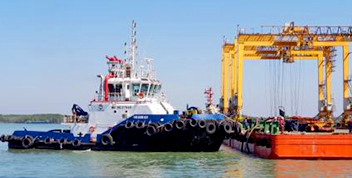 A tugboat operated by the MOL Group's tugboat company