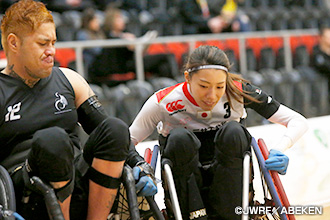 The world championship, which brings together the most prestigious teams from all over the world, has been held every four years since 1995. Japan's best previous finish was third place, but this year, after taking second place in pool A of the preliminary league, in which 12 national teams were divided into two pools, Japan notched a victory over the second-ranked U.S. team in the semifinal and went on to beat top-ranked Australia in the final to take home the trophy.

MOL has co-sponsored the Japan Wheelchair Rugby Federation as an official partner since April of this year. The company believes that members of the Japan National Wheelchair Rugby Team, who faced the challenge of worldwide competition and captured their first championship, embody the five words in "MOL CHART" (*4) that express the company's shared values — "Challenge (Innovate through insight)," "Honesty (Do the right thing)," "Accountability (Commit to acting with a sense of ownership)," "Reliability (Gain the trust of customers)," and" Teamwork (Build a strong team)." MOL CHART expresses the values to be shared by all members of the MOL Group worldwide, and the common guidelines that will direct the company to the best course of action, ensuring the best results for stakeholders and realizing MOL's corporates goal and long-term vision.

MOL continues to promote the expansion of wheelchair rugby, and foster an environment that encourages its diverse employees to play active roles inside and outside the company.

(*1) About wheelchair rugby
Wheelchair rugby is a mixed-gender team sport for athletes who have disabilities requiring them to use wheelchairs. This is the only sport in the Paralympic Games that permits contact between wheelchairs. Players are allotted from 0.5 to 3.5 points depending on their level of disability. Under this system, the total points of four players on the court must be within 8.0 points. The wheelchairs used in the game are reinforced to make them durable enough to withstand extreme contact, and modified for players in different positions.