TOKYO-Mitsui O.S.K. Lines, Ltd. (MOL; President & CEO: Junichiro Ikeda) today announced that it has teamed up with Oki Electric Industry Co., Ltd. (OKI; President: Shinya Kamagami; Headquarters: Minato-ku, Tokyo), to start a joint study on the use of OKI's new "FlyingView®" bird's-eye view monitoring system to monitor a 360° field of view around a tugboat. In preparation for the study, the system was installed on the tugboat Asaka Maru (built in September 2012, 233 gross tons) owned by Nihon Tug-Boat Co., Ltd. (President: Tetsuro Nishio; Headquarters: Chuo-ku, Kobe), and a preliminary experiment was conducted.

As a tugboat approaches a large vessel for assistance, only a small part of the vessel's hull can be seen from tug's bridge, and therefore, the tugboat relies on instructions through the radio from the pilot onboard the target vessel. The experiment was done in a situation with OKI's "FlyingView" setting four fish-eye cameras on the mast, and a digital compositing system and display in the bridge, making the captain to be able to objectively grasp conditions around the tugboat in real time. This makes it possible for the tug's operator to objectively recognize the boat's surrounding situations (Note 1). The boat can also instinctively grasp its distance from surrounding obstacles and other vessels, and this leads to reducing the risk of an accidental contact with the target vessel and more effectively assisting its safe berthing and unberthing.

MOL positions navigation support systems featuring image recognition, such as the AR Navigation System (Note 2), which is already in practical use, as part of its challenge project, called the "FOCUS EYE" series (Note 3), aimed at developing technologies that will contribute to company's world-leading level of safe operation. It focused on OKI's "FlyingView" system as a part of the series, with the goal of speeding up its initiatives on enhancing safe operation by advancing joint development of the system, including a study of ways to adopt it on large vessels.

MOL has moved ahead with advanced support of safe operation and reduction of its environmental impact, as set out in the "ISHIN NEXT - MOL SMART SHIP PROJECT -," launched in November 2016, and aims to become the customers' first choice as a logistics partner by applying information and communications technology (ICT) to improve service quality and efficiency. 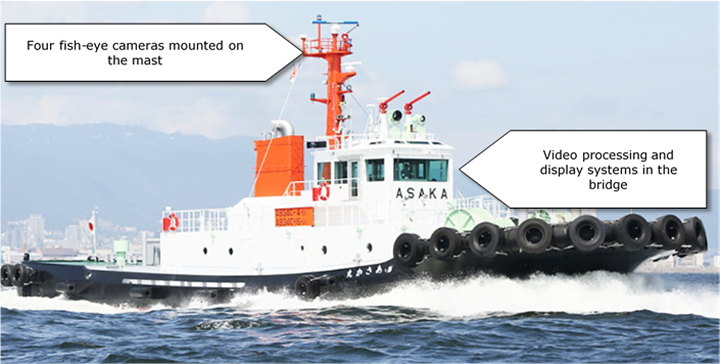 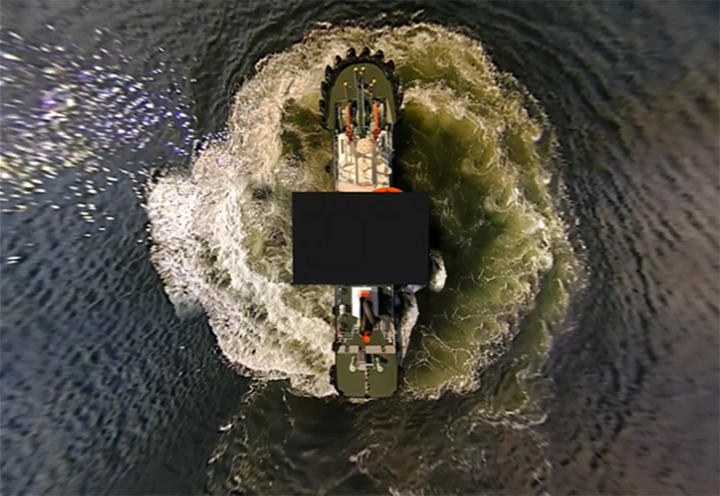 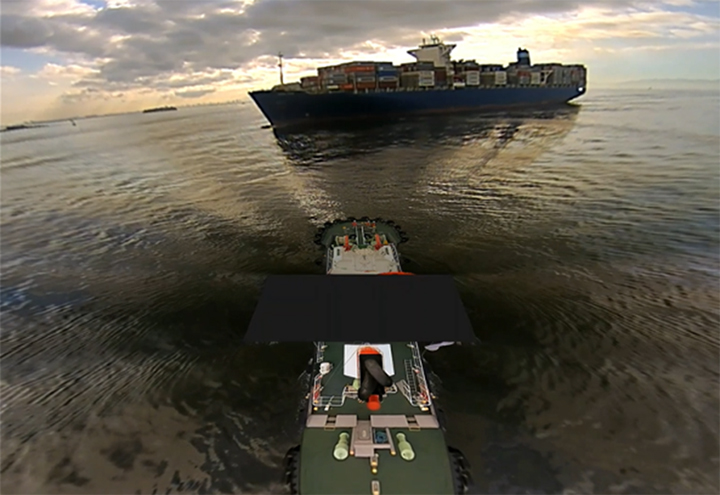 The Asaka Maru (foreground) as seen by "FlyingView,"
and a composite image with the target vessel to be assisted
(a containership's berthing operation)

(Note 1) "FlyingView" bird's-eye view monitoring system
The system comprises four fish-eye cameras mounted on mast of the tugboat, digital compositing system, and display. Camera images are composed on the field-programmable gate array (FPGA), which has high-resolution image processing capabilities, to realize large-capacity, high-quality image processing in real time and in portable energy saving system, providing seamless, bird's-eye view image monitoring with virtually no blind spots in a wide area surrounding the tugboat. FPGA is an integrated circuit that the purchaser and designer can custom-configure after manufacturing, and is a type of programable logistic device (PLD) in a broad sense.
"FlyingView" is a registered trademark of OKI. 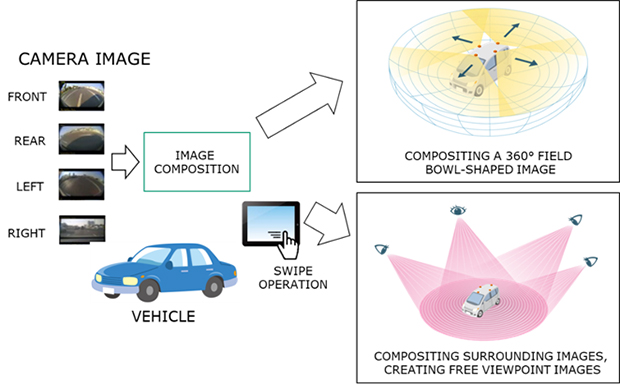 Example: Use of "FlyingView" on a car (provided by OKI) 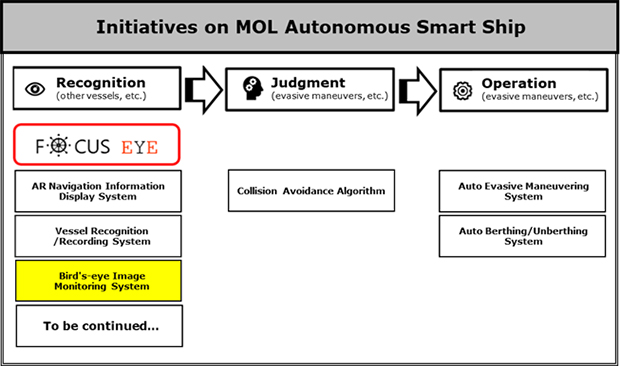