Scene of the table top drill 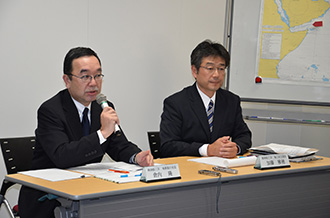 TOKYO - Mitsui O.S.K. Lines, Ltd. (MOL; President: Koichi Muto) today announced that the company conducted a tabletop drill based on a scenario in which one of its car carriers came under attack by pirates off Somalia. The Japanese Coast Guard provided advice for the drill, the latest in a series of exercises aimed at enhancing MOL Group readiness for serious marine incidents.

The drill was held on Friday, November 8, with the goal of strengthening MOL's emergency response structure, which is based on the MOL Group Corporate Principles - protecting the environment by maintaining strict, safe operation and navigation standards. The exercise was also designed to ensure the smooth, precise communications that are so critical in an event such as a pirate attack involving an MOL-operated vessel.

Under the drill scenario, the car carrier was under way on the Indian Ocean when its main engine began to leak oil. The vessel stopped the engine immediately, and the pirates attacked while the crew was repairing the engine.

Immediately after receiving an emergency report of the pirate attack, MOL organized an Emergency Control Headquarters within the company, began first-response measures and procedures that included information gathering, communications among the concerned parties, and directions and instructions to the vessel, and held a joint media response drill.

The company continues to sharpen its group-wide emergency response readiness by sharing know-how accumulated in these emergency table top drills throughout the MOL Group and its fleet.