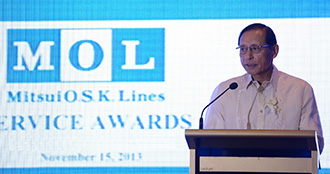 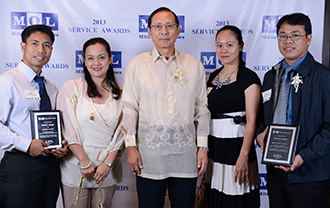 Commendations went to seafarers with about 20 years of long-term service aboard MOL-operated vessels. The awards express MOL's appreciation for the seafarers who are an essential asset for the MOL Group and for the daily support of their families at home while they are away at sea. One hundred seventeen seafarers from Luzon received the awards this year, and 214 people including their families were on hand for the ceremony. MOL Chairman Akimitsu Ashida and Executive Officer Takaaki Inoue and A. Magsaysay Inc. President Doris Magsaysay Ho and Chairman Eduardo U. Manese also participated in the event. MOL believes these commendations promote seafarers' sense of belonging and solidarity, and hopes these long service award winners will serves as role models in passing on MOL's safety culture to younger seafarers.

In his remarks, MOL Chairman Ashida expressed the company's heartfelt sympathy to those afflicted by the recent typhoon that devastated the central Philippines. He also discussed the key role seafarers play in safe operation and expressed his gratitude to seafarers and their families for their long service to the MOL Group.

"I appreciate MOL's support of my career advancement and my family," said one winner. Said one family member, "The opportunities MOL has provided for my husband will lead to a bright future for our children. I really enjoyed the service award ceremony, and I am so happy to receive the plaque and beautiful bouquet of flowers."

MOL continually conducts such programs in the Philippines and other major countries where its seafarers come from, striving to provide a pleasant working environment while expressing appreciation for their contributions to the company's success.