TOKYO-Mitsui O.S.K. Lines, Ltd. (MOL; President: Koichi Muto) today announced plans to assist the non-profit organization South Africa Primary Education Support Initiative (Sapesi-Japan, *) with the ocean transport of mobile library vehicles to the Republic of South Africa. This marks the fourth time since 2009 that MOL has contributed to this initiative.

On May 22, a ceremony for the departure of the six mobile library vehicles-donated from all over Japan-was held at the South African Embassy in Tokyo, with participants including South African Ambassador in Japan Her Excellency Mohau Pheko and MOL Senior Managing Executive Officer Takashi Kurauchi. The mobile libraries that played an important role in local communities in Japan will soon gain new lives in visiting elementary and junior high schools in South Africa and contributing to the education of both students and teachers.

Contribution to the United Nations (UN) Millennium Development Goals is one of the principles of MOL's social contribution activities. These goals aim for measurable targets such as achieving universal primary education and ensuring environmental sustainability by 2015.

MOL proactively undertakes social contribution activities that make use of its unique characteristics as a shipping company with a global network.

At the departure ceremony, in front of a mobile library. MOL Senior Managing Executive Officer, Takashi Kurauchi is the third from the right, the Ambassador of the South Africa in Japan Her Excellency Mohau Pheko is the forth. Sapesh-Japan Director Katsuya Egawa is on the very left. 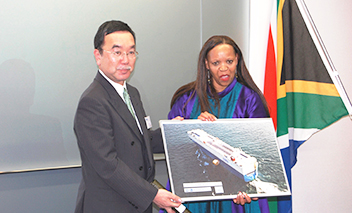 *The NPO Sapesi-Japan cooperates with the South African Ministry of Education to collect retired mobile library vehicles throughout Japan and donate them to South Africa to raise the level of elementary education. In 2008, it was established as an NPO. Since then, the organization has promoted mobile library services and worked to improve school libraries.