On September 25, MOL Managing Executive Officer Takaaki Inoue presented a vessel photo to Yuji Hayashi, Head of the Faculty of Maritime Sciences at Kobe University. Hayashi responded: "Students will be captivated by the sight of this merchant vessel and set their life goals. I think this is the beginning of such stories."

On September 30, in a donation ceremony at Tokyo University of Marine Science and Technology, Inoue presented a photo to Principal Nobuaki Okamoto and Academic Administrator Motoji Takamasa. Principal Okamoto, "Thank you very much for donating the photo of a vessel representing MOL. I will take pride in pointing out this photo to students."

MOL has enjoyed a 130-year history of success thanks in large part to the skills and dedication of its crewmembers. The company presented the photographs to maritime training institutes in Japan that have done so much to cultivate highly skilled seafarers been backed by competent crewmembers. The company hopes that the photographs of a vessel representing MOL will serve as a compass for the young people who will forge the future of the Japanese maritime industry.

MOL takes an ongoing, proactive approach to social contribution activities as part of its effort to be a good corporate citizen. 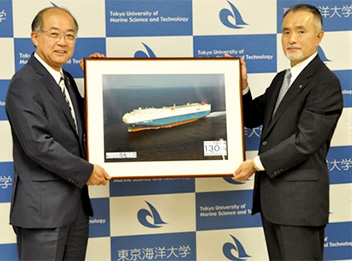