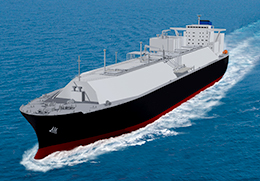 This is the second vessel MOL will manage, following another newbuilding LNG carrier, which contracted with Tokyo LNG Tanker and JMU on February 28, 2014. The second vessel will transport LNG from the Cove Point LNG Project in the United States to Tokyo Gas facilities.

MOL is involved in operating ten of 13 LNG carriers owned and managed by Tokyo LNG Tanker, including this newbuilding vessel, and directly manages seven of those ten ships.

Drawing on its extensive experience, know-how, and networks as the world leader in LNG carrier ownership and management, MOL continues to take a proactive stance in offering safe and stable transport of LNG, the leading source of clean energy, which has become more important in recent years.

[ Profile of a newbuilding LNG carrier ]