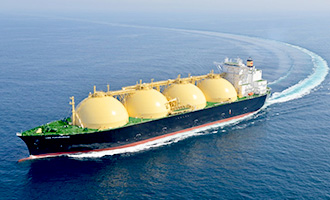 Among the many guests on hand were KEPCO President and Director Yagi, who named the new vessel, and his wife, who cut the rope. The LNG FUKUROKUJU will serve a broad range of projects including the Australia/Pacific LNG Project (*3) after the delivery.

The vessel adopts a new steam turbine engine that reuses steam for heating, which will also reduce fuel consumption, and an advanced heat insulation system that offers the lowest LNG vaporization rate - 0.08% - of any LNG carrier in the world. Its environment-friendly, economically-advanced design also effectively controls surplus boil-off gas.

To realize the goal of "solid growth through innovative changes" stated in the midterm management plan STEER FOR 2020, the MOL Group uses its decades of experience and know-how as the world's leading LNG carrier owner and management company and works aggressively to provide value-added LNG transport services tailored to the needs of customers, including electric power and gas companies in Japan.

(*3)The project promoted by Australia Pacific LNG Limited (APLNG). Its outline is as follows