Due to shallower water depth at the Bangkok river port, Laem Chabang port which locates about 90km south has become the main gateway port of Thailand with its capability in accommodating many liner services with larger containerships. Consequently, container transport between Laem Chabang and the outskirts of Bangkok by land transport via truck and rail, as well as waterway transport via barges now play important roles.

Barge transport is positioned for an increase in demand, since it has bigger capacity and offers considerable advantages in safety and environmental friendliness. The BBT-operated barge container terminal, slated to open in 2016, will serve as a new gateway to Laem Chabang Port for customers who need cargo moved to and from the outlying areas of Bangkok.

MOL has moved proactively to expand its businesses including container terminal operation at Laem Chabang Port, warehousing, trucking, and container and truck depot operation, providing a full range of high-quality services. With the addition of BBT to its service menu, MOL will provide further diversified, higher quality services tailored to customer needs. 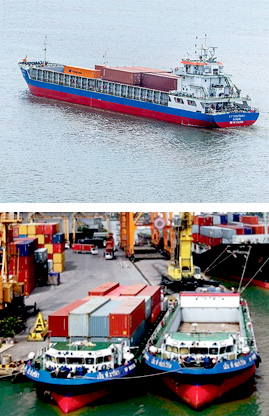 (*1)About SahaThai
SahaThai opened a container terminal on the banks of the Chao Phraya River in Bangkok in 2007. The terminal currently accommodates intra-Asia container services and barge services. The company not only operates the container terminal, but also provides logistics services including warehousing in Thailand.