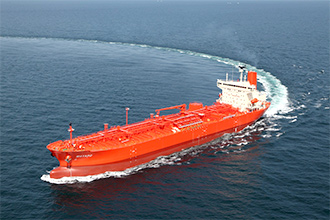 MOL centrally collects big data gathered from its operated vessels, aiming to establish an integrated vessel operation support network that allows timely analysis of results on shore and at sea through marine onboard broadband systems to support vessel operation, reduce environmental impact, improve cost efficiency, and streamline vessel management, in addition to other benefits. The demonstration test is part of this initiative.

The "CMAXS e-GICSX" uses the combination of technologies accumulated through MES's "e-GICS" (*2) system and a cutting-edge data analysis function using ClassNK's "CMAXS" system (*3), based on joint research between ClassNK and MES. A comparative analysis of the "CMAXS e-GICSX" system will be verified on the MAYARO, a vessel operated by MOL, which has a high level of ship management know-how. The demonstration test aims to verify that the system is a practical and highly reliable next-generation condition-based engine monitoring system.

Today, most merchant vessels are equipped with electronically controlled engines, allowing for collection of massive volumes of engine performance data. In addition, advanced ship-to-shore telecommunication equipment enables the collection of hour-to-hour big data including weather and hydrographic conditions. MOL - at sea and on land - takes a proactive stance in development and introduction of technologies that contribute to safe operation, continually forging ahead toward "Reconstruct our safe operation structure" set forth in the midterm management plan "STEER FOR 2020".

(*1)"CMAXS e-GICSX" is the system that has the capability to detect abnormalities aboard, regardless of ship-to-shore telecommunication status and displays of troubleshooting based on the results of detected abnormalities. It is different from conventional condition-based monitoring systems and can analyze correlations among multiple sensors by using an advanced algorithm.

(*2)"e-GICS," developed by MES in 2004, is a Web-based maintenance support system for vessel diesel engines. It diagnoses engine performance and maintenance of major components. It is used aboard more than 3,000 vessels.

(*3)"CMAXS" is a system offered jointly by ClassNK and ClassNK Consulting Service (CEO and President: Noboru Ueda; Headquarters: Chiyoda-ku, Tokyo), a wholly owned subsidiary of ClassNK. It was developed based on expertise related to vessel inspection in anticipation of further streamlining engine inspection.