To express MMM's appreciation for the contributions of the seafarers who play a key role in safe vessel operation, and their families who support them during their months away at sea, awards and recognition went to seafarers with 15 years of service aboard MOL-operated vessels. A total of 73 people were award during the ceremony and families of awardees were also invited. Representing MOL at the event was President & CEO Junichiro Ikeda. He praised the recipients' long service with MOL and urged them to continue their work with a renewed focus on safe operation.

One award recipient commented: "I am proud that I can contribute to the safety of MOL-operated vessels." A wife of an award recipient said, "I really appreciate MOL, which is a prestigious, disciplined and competitive company with integrity, for taking care of my husband's career well. We admire MOL for its support in various ways towards my husband and us, which inspires my husband to work harder and to be a world-class seafarer."

Family Day was held at an amusement complex in Manila, drawing about 4,000 seafarers and their families. President & CEO Ikeda expressed his gratitude for the families' understanding and support of MOL seafarers and highlighted their important role, which will become more crucial in the future.

"Congratulations to MMM for very successful family day. My children appreciated how their father works hard while he is away from the family, in order to let them have good life and education. And the show was really touching and heartwarming. Kudos to MMM, which treat us very special," said one family member.

MOL Group continually conducts such programs in the Philippines and other countries that are home to its multinational maritime workforce, striving to provide a pleasant working environment while expressing appreciation for their contributions to the company's success. 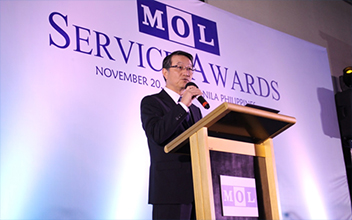 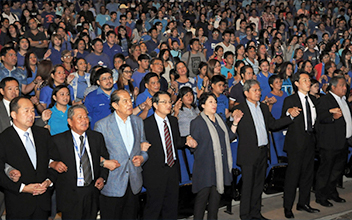