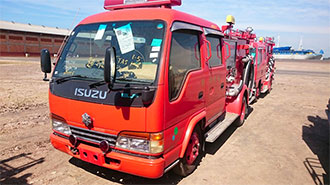 A Fire Engine at the Port of Asuncion, Paraguay

TOKYO-Mitsui O.S.K. Lines, Ltd. (MOL; President & CEO: Junichiro Ikeda) today announced that the company transported fire engines to Paraguay, in cooperation with the Paraguayan Embassy in Tokyo. This has been an ongoing social contribution activity for MOL, and the most recent shipment marks the eighth time the company has stepped up to help.

Seven fire engines, which were loaded on the MOL-operated Galaxy Ace in the Port of Yokohama, arrived at the Port of Asuncion on January 9. The engines will help the nation upgrade its firefighting and public safety capabilities.