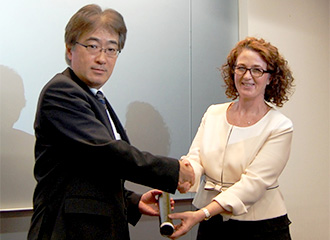 Sapesi-Japan cooperates with the South African Ministry of Education to collect retired mobile library vehicles throughout Japan and donate them to South Africa to raise the level of elementary education. In 2008, it was established as an NPO. Since then, the organization has promoted mobile library services and worked to improve school libraries.

MOL previously transported 38 vehicles, and in this phase, it is transporting seven more, donated from all over Japan. Four of them were transported by the MOL car carrier Garnet Ace, which departed Japan in October 2015, and arrived at the Port of Durban at the end of November. The other three are scheduled to arrive at the port in May.

On March 17, a ceremony marking the transport of the mobile library vehicles was held at the South African Embassy in Tokyo, with participants including Ms. René Everson-Varney, Chargé d'Affaires of the Republic of South Africa, and MOL Car Carrier Division General Manager, Hirotoshi Ushioku. The mobile libraries that played an important role in local communities in Japan will soon gain new lives visiting elementary and junior high schools in South Africa and contributing to the education of both students.

A commemorative shot in front of one of the mobile libraries