A naming ceremony was held at the shipyard on April 8. The KUMUL, which was ordered by MOL subsidiary Gemini LNG Shipping Limited (Gemini), is the last in a series of four new-building LNG carriers ordered by MOL to provide LNG transportation for projects in Papua New Guinea. MOL will operate the KUMUL under a long-term charter contract for the PNG LNG project operated by ExxonMobil(*).

This project is deeply rooted in China at many levels - it marks the first time a Chinese shipyard has built LNG carriers ordered by a non-Chinese shipping company, and it involves LNG transport for Asian LNG buyers including a Chinese energy major, China Petroleum & Chemical Corporation (SINOPEC), as well as the co-ownership of LNG carriers between China's major ship operators, China COSCO Shipping Corporation (CCSC), and a SINOPEC joint venture.

Gemini entrusted MOL to assign technical experts to the Hudong shipyard since January 2011 to promote this project and enhance ship construction quality and safety standards at the shipyard, under a cooperative relationship with ExxonMobil and CCSC. This also helped the company accumulate new expertise related to shipbuilding.

Thanks in large part to the cooperation of the engineers assigned to the shipyard, the first vessel, the PAPUA, was delivered in January 2015, the second, the SOUTHERN CROSS, in June, and the third, the BEIDOU STAR, in November. With the delivery of the KUMUL, the fourth and final vessel in the series, all vessels have been delivered and launched to sail under long-term charters with ExxonMobil. An MOL Group company will handle ship management and ensure its safe, efficient, and reliable operation.

MOL is currently involved in the operation of about 70 LNG carriers, and is aiming to continually expand the fleet. MOL will draw on the experience it has gained in this project, building international cooperation and developing ties with the Chinese parties involved to ensure the growth of MOL's future global business, and takes a proactive stance in providing its customers with safe, reliable LNG transport services.

(*) For details, please refer to the press release on March 3, 2010:
MOL Signs a Contract for Long-term Charters of LNG vessels by ExxonMobil
and the release on January 17, 2011:
Hudong-Zhonghua Selected to Build LNG Carriers for PNG and Gorgon Jansz LNG Projects 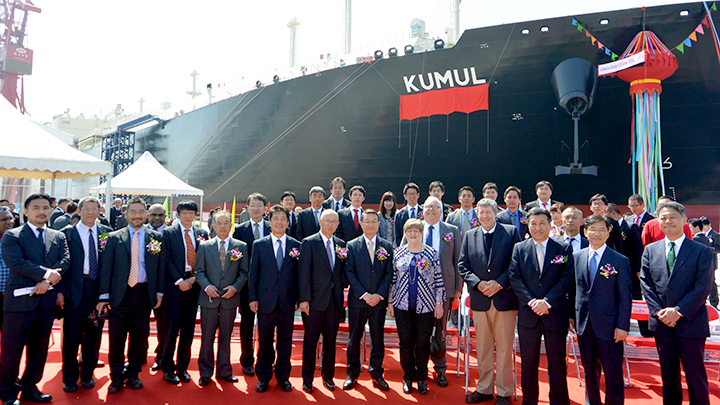 At the naming ceremony on April 8