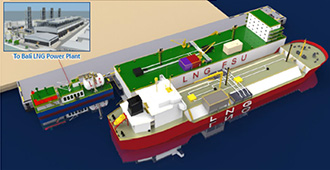 Layout of the LNG Carrier Triputra,
the FSU and FRU (Source: Gas Entec)

This is the second coastal shuttle transport project following one serving for West Java(*), for which MOL secured an order in 2011. In that project, a vessel shuttle-transports LNG to the Port of Benoa, and discharges it to a floating storage unit (FSU) moored there.

PEL, the charterer, is working to establish a gas value chain with the new method-transferring LNG discharged to FSU to the floating regasification unit (FRU) moored at the pier. This facility regasifies the LNG and pipes the gas to a power plant on Bali. This is a groundbreaking project that pioneers a new mode of transport for natural gas.

Since 1986 when MOL established a joint ship management company with a local partner in Indonesia, it has focused on training Indonesian mariners. As a world-leading LNG carrier owner and management company, it takes a proactive stance in offering LNG transport services in Southeast Asia including Indonesia, where domestic demand is increasing for natural gas as a clean energy source, by effectively using its accumulated know-how and resources not only in the ocean LNG carrier field, but also in coastal LNG transport.

(Note 1) Wholly owned by the Humpuss Group of Indonesia, which engages in ocean shipping, air transport, and oil trading businesses

(Note 2) A subsidiary in Japan, in which Indonesia's state oil and gas company, PT Pertamina (Persero) holds a 50% stake