Top Page > Press Release 2016 > MOL Hosts Receptions for Customers in Vietnam - About 350 guests are on hand in Ho Chi Minh City and Hanoi; MOL looks ahead to further business development -

MOL Hosts Receptions for Customers in Vietnam
- About 350 guests are on hand in Ho Chi Minh City and Hanoi; MOL looks ahead to further business development -

In his opening address at the receptions, MOL President & CEO Ikeda said MOL Group has high expectations for Vietnam's future growth and that the group will continue to focus on improving its recognition and brand power as a world leading multimodal corporate group in Vietnam. He also expressed the group's determination to work beyond divisional boundaries to meet customers' needs under the motto "One MOL".

The relationship between MOL and Vietnam date back to 1896, when the ARIAKE MARU, operated by Mitsui & Co., Ltd. Shipping Department, one of MOL's predecessors, transported rice from Saigon to Kobe. In the ensuing 120 years, the company has continued to develop its business in Vietnam, centering on containership operations in recent years. In 2006, MOL became the only Japanese shipping company authorized by the government to establish a wholly owned subsidiary - Mitsui O.S.K. Lines (Vietnam) Ltd., (*2) which this year celebrates its 10th anniversary. In the terminal business, MOL invested in Cai Mep Port, which opened in 2001, and Lach Huyen Port, which is slated to open in 2018. It its bulkship business, the company take a proactive stance in transporting wood chips, coal, and steel from Vietnam. Other MOL Group companies play vital roles in Vietnam's economy and generate synergies within the group, including MOL Logistics (Vietnam) Inc., which was established in 2005 and provides nationwide logistics services; Daibiru Corporation, which provides office rental services at buildings in Ho Chi Minh City and Hanoi; and Tan Cang-Cai Mep Towage Services Co., Ltd., which operates tugboats in the Cai Mep area.

MOL, as a multimodal corporate group, works continually to meet various customer needs and takes a proactive stance in promoting economic development in Vietnam and around the world.

(*2) For the details, please refer to the press release on July 20, 2006:
MOL to Establish Wholly Owned Subsidiary in Vietnam 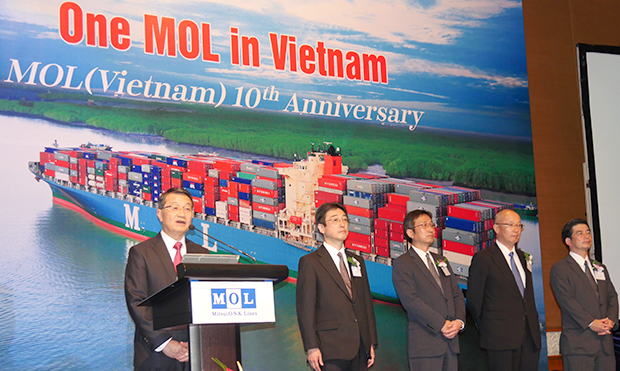