TOKYO-Mitsui O.S.K. Lines, Ltd. (MOL; President & CEO: Junichiro Ikeda) today announced that Lakler S.A., 100% subsidiary of MOL, has officially agreed to conclude a long-term charter contract with Gas Sayago of Uruguay, a joint venture between Uruguay's state oil company ANCAP and state power company UTE, for a floating storage and regasification unit (FSRU) project, led by Gas Sayago. The signing ceremony for the charter contract was held with participation of the concerned parties in Montevideo on July 20 (local time).The contract will take effect upon governmental approval which is expected to be granted by the end of 2016.

The FSRU will be equipped with the largest LNG storage tank (263,000m3) of any FSRU in the world, and supply gas to Uruguay and its neighboring countries. It is currently under construction at Daewoo Shipbuilding & Marine Engineering Co., Ltd. in South Korea. After completion, it will enter 20 years charter starting in the first half of 2018.

The FSRU also has equipped the capability of re-loading LNG cargo to shuttle tankers as well as sending gas through pipelines. These specifications allow LNG re-export services and LNG bunkering services to the country and its neighboring regions. The MOL Group continues its efforts and focus in developing the LNG secondary transport and LNG fuel supply businesses in Central and South America region, where strong growth of LNG demand is expected.

FSRUs receive liquefied natural gas from LNG carriers, regasify it, and transmit it under high pressure to pipelines on land. Since the first practical application of this process in 2005, FSRU projects have been introduced all over the world as an effective solution for developing LNG terminals in less time and at lower cost than conventional land-based terminals. The MOL Group anticipates continued growth in the FSRU field, and is aggressively seeking new opportunities, drawing upon more than 30 years of experience and a strong track record in LNG loading/discharging, vessel operation, and maintenance. 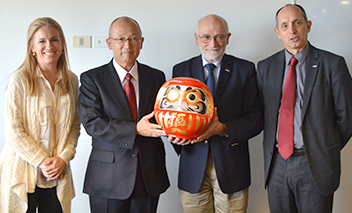 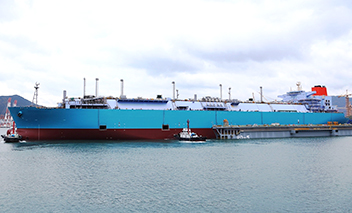