Vehicles produced at Zarate plant to be exported to the majority of the Latin American Region and this is also an economically important project backed by the Argentine government. MOL is supporting the initiative by providing reliable, efficient ocean transport service.

MOL and TASA held a joint ceremony on August 10 (local time) at the Port of Zarate to mark the first shipment on the newly inaugurated route. Guests included government officials and representatives from the Zarate terminal operator and stevedoring company, as well as executives from TASA and MOL.

MOL's new services will play a key role in meeting robust demand for transport of completed vehicles in this region based on the company's know-how and expertise accumulated in more than 50 years of car carrier operation. 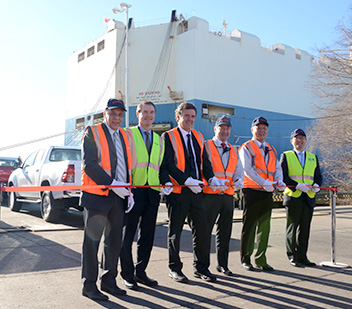