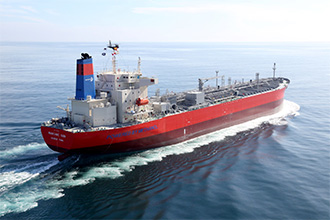 The Manchac Sun stands as a cutting-edge "eco-ship" as one of the world's first series of the vessels equipped with 2-stroke dual-fueled low-rev main engine capable of running on methanol which is a biodegradable clean burning marine fuel. Methanol significantly reduces smog-causing emissions such as particulates, sulphur oxides and nitrogen oxides. In addition, it is also equipped with a ballast water treatment system, ahead of treaty requirements mandating such systems, and adopts energy-saving accessories in front of and astern of the propellers.

MOL works continually to upgrade its methanol transport services by leveraging experiences and know-how accumulated over many years, meet a broad range of customer needs, and proactively introduce various technologies that contribute to reduction of environmental impact.