On October 18, before the delivery, the naming ceremony was held at Hudong. As a crowd of well-wishers looked on, the vessel received the name CESI Gladstone. It is the first vessel to serve in the LNG transport project for SINOPEC announced in April 2013(*1), and will sail under a long-term charter contract to transport LNG that SINOPEC will purchase from the Australia Pacific LNG Project.

This follows the ExxonMobil LNG project, announced in March 2010 (*2), for which four newbuilding LNG carriers were ordered from Hudong and delivered by April of this year. The project has deep roots in China from many aspects, such as LNG transport for SINOPEC, the nation's major energy projects, and the joint venture involving SINOPEC and China COSCO Shipping, China's largest shipping company, as well as MOL. The joint venture, capitalized 80% by SINOPEC and China COSCO Shipping and 20% by MOL, is committed to safe, reliable operation.

In cooperation with China COSCO Shipping, MOL played key role in vessel construction together with Chinese partners. It assigned technical experts to the shipyard in China and created a shipbuilding supervision team made up of multinational staff, mostly Chinese and Japanese, to ensure the safe and high-quality of the newbuilding LNG carriers. Starting with the CESI Gladstone, a total of six newbuilding LNG carriers will be delivered from this year through 2018. The CESI Gladstone is a major milestone, as the first vessel to serve this project.

(*2) Please refer to the press release "MOL Signs a Contract for Long-term Charters of LNG vessels by ExxonMobil" on March 3, 2010. 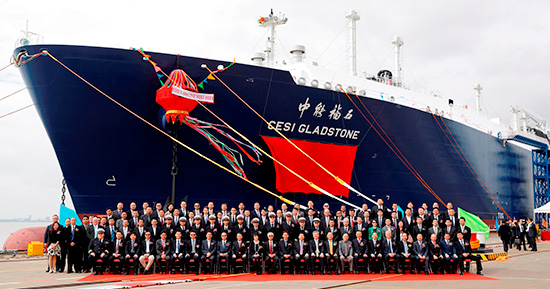