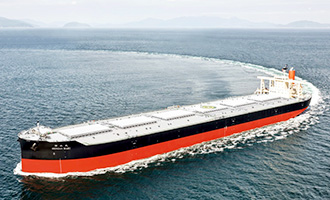 Among those on hand for the ceremony was Kobe Steel Chairman, President, CEO, and Representative Director Mr. Hiroya Kawasaki, who named the new vessel, after which his wife cut the rope.

Shinzan Maru is an established name for vessels transporting raw materials to Kobe Steel that dates back to the era of Yamashita-Shinnihon Steamship Co., Ltd. (YSL), one of MOL's predecessors. The new vessel is the third generation to sail under the Shinzan Maru name, and will ensure a stable transportation of iron ore for Kobe Steel.

The MOL-ordered vessel features a design improving fuel efficiency, plus cutting-edge energy-saving technologies such as a heat recovery system that can use mid- and low-temperature heat sources from 70 degrees C to 250 degrees C. It also represents the next generation safety-conscious vessels, adopting the integrated navigation system, in which electronic chart displays, radar screens, alarm displays and other voyage information are optimally located in consideration of the movement of crewmembers during a voyage.

MOL continually provides stable and safe transport services of raw materials for customers around the world.