TOKYO-Mitsui O.S.K. Lines, Ltd. (MOL; President & CEO: Junichiro Ikeda) today announced that the company conducted a tabletop drill based on a scenario in which an iron ore carrier, managed by its group ship management company, collided with a breakwater, leaving it stranded in the Port of Kashima.

The drill was held on Wednesday, November 16, 2016, with the goal of strengthening the company's emergency response structure, which is based on the MOL Group Corporate Principles - nurture and protect the natural environment by maintaining the highest standards of operational safety and navigation. The exercise was also designed to ensure that the company can respond swiftly and appropriately in case of a serious marine incident, and maintain the timely flow of accurate information. In addition, the drill was intended to reconfirm lessons learned from the stranding incident involving an iron ore carrier that occurred off Kashima in 2006, and mark the 10th anniversary of that incident.

Under the drill scenario, the engine failed while the vessel was underway in a channel at the port. It evacuated to outside the Port of Kashima, which had issued an evacuation order due to an approaching storm. The vessel was unable to maintain its course in the rough weather and collided with the breakwater, leaving it stranded. MOL then organized an Emergency Control Headquarters within the company, collected information through teleconferencing with the ship management company in the Philippines, and took initial responses such as ensuring the safety of the crewmembers, preventing an oil spill, and protecting the hull and cargo, followed by a joint media response drill.

The company continues to sharpen its group-wide emergency response readiness by sharing know-how accumulated in these emergency tabletop drills, as well as newly identified opportunities for improvement, throughout the MOL Group and its fleet. 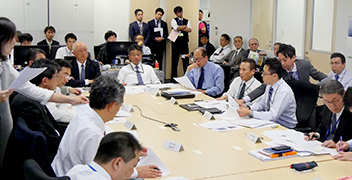 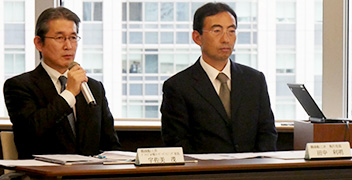