Beginning with the conference in Croatia, the events opened with a powerful message from MOL President & CEO Junichiro Ikeda: "Let's forge ahead to further enhance safe operation with the aim of 'Four Zeroes'(Note) under 'One MOL' as a global team."

Senior Managing Executive Officer Captain Masaaki Nemoto, who also serves as Director General of Safety Operations Headquarters, and many other MOL executives and staff members also participated in the conferences. Along with managers from in-house ship management companies and manning companies, they led active discussions of actual incidents and work-related accidents.

The Japan P&I Club was invited to the conferences in Manila and Tokyo to enlighten seafarers about healthcare issues.

Since 2007, the MOL Safety Conference has been held annually in the group's major seafarer source nations with the main objectives of exchanging opinions about safe operations among seafarers around the world so that they can enhance their awareness for safety. MOL continues its efforts to become "the world leader in safe operation" through those activities. 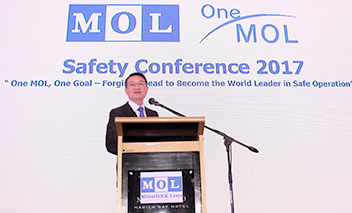 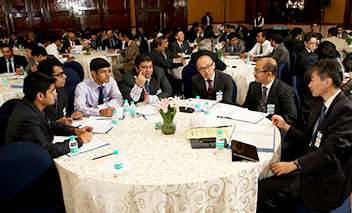 During the conference in Mumbai