TOKYO-Mitsui O.S.K. Lines, Ltd. (MOL; President & CEO: Junichiro Ikeda) today announced the company's recent transport of used fire engines to Paraguay, in cooperation with the Embassy of the Republic of Paraguay in Japan. This is an ongoing social contribution activity starting in 2010. This year marked the 10th time MOL has contributed to improved emergency services in Paraguay, transporting a total of 58 emergency vehicles.

This time, 10 fire engines and an ambulance were loaded aboard the MOL-operated car carrier Swift Ace, which arrived at the Port of Asuncion on February 12. The vehicles were presented to Paraguay's fire service at a ceremony on March 8.

On April 4, Ambassador of the Republic of Paraguay in Japan H.E. Naoyuki Toyotoshi, who took part in the presentation ceremony in Paraguay, visited the MOL Head Office and gave a letter of appreciation from the fire service to MOL President & CEO Ikeda. Ambassador Toyotoshi said, "The fire engines are effectively used all across Paraguay, and are much appreciated by local communities." 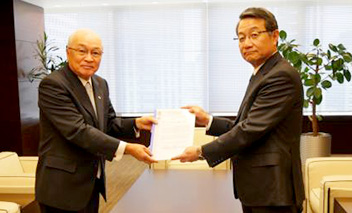 Ambassador of the Republic of Paraguay in Japan H.E. Naoyuki Toyotoshi (left) presents MOL President & CEO Juinichiro Ikeda with a letter of appreciation 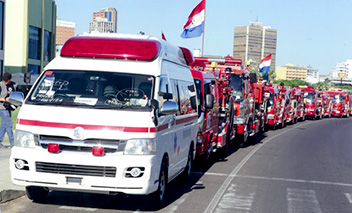