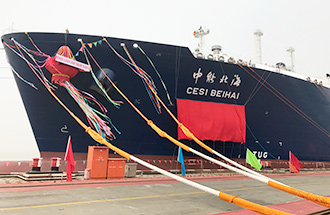 The CESI Beihai is the third vessel to serve the China FOB Transportation Project" (*1) announced in April 2013, and will sail under a long-term charter to transport LNG that SINOPEC purchases from the Australia Pacific LNG project.

A total of six LNG carriers are being built at Hudong for the project. The first vessel, the CESI Gladstone, was delivered in October, 2016, and the second, the CESI Qingdao, in January of this year. (*2) The remaining three will be delivered in succession by 2018.

MOL strives to meet expanding and diversified transport needs associated with growing worldwide demand for LNG by leveraging the experience accumulated in international joint projects, while providing value-added transport services to customers around the world.