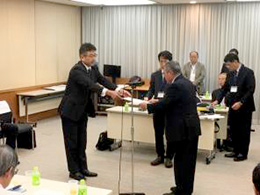 The awards, introduced in 2003, are aimed at heightening awareness of the need to protect harbors and the marine environment through safe operation of oceangoing vessels. The ships receiving the awards are those judged superior by members of the JFPA.

For the 2016 awards, seven vessels were selected from among ships that requested pilots at pilotage districts throughout Japan in September and October. Among the seven, two were operated and managed by MOL, demonstrating the company's high level of cooperation between pilots and the captains and crewmembers of the vessels, as well as the quality of their onboard equipment and boarding/disembarking facilities.

The awards ceremony was held on June 23, and an MOL executive received an award certificate and memento from JFPA Chairman.

As MOL forges ahead to become the world leader in safe operation, it continually strives to contribute to marine safety and conservation of the global environment, as a synergistic, sustainable company that grows in harmony with society.