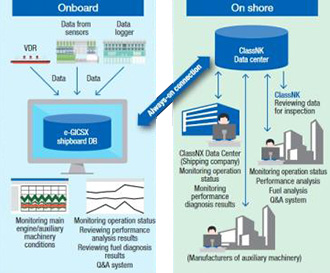 Using the operation monitoring system, it detects predictive abnormalities in the engine, which are hard to be recognized by crewmembers, to prevent engine trouble and minimize downtime.

Under the "ISHIN NEXT - MOL SMART SHIP PROJECT" (Note2), announced in November 2016, MOL is collecting and centralizing big data on board its operated vessels, with the goal of establishing an integrated vessel operation support network that allows timely analysis of results on shore and at sea through marine onboard broadband systems. This network will support vessel operation, reduce environmental impact, improve efficient navigation, and streamline vessel management, in addition to other benefits. The project announced today is part of this initiative.