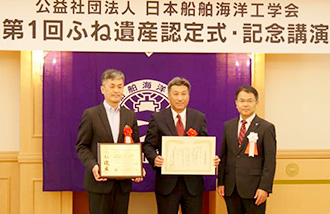 TOKYO-Mitsui O.S.K. Lines, Ltd. (MOL; President & CEO: Junichiro Ikeda) today announced that the engine control console installed on the bridge of the Kinkasan Maru (Note1) was selected for a "Ship Heritage Certificate" from the Japan Society of Naval Architects and Ocean Engineers (JASNAOE). The society noted that the Kinkasan Maru's system represented a pioneering step in the development of automated engines (Note 2).

The Kinkasan Maru, a diesel-powered general cargo ship, was built in 1961. It was the world's first vessel equipped with an automated engine, which marked a breakthrough remote operation and automatic control of the main engine at the time.

Marking the 120th anniversary for its founding this year, JASNAOE launched the "Ship Heritage" project with the goal of certifying vessel-related heritage items that have historical value, promote public recognition of them, and pass them on to future generations as elements of cultural heritage.

This time, nine ship and ship-related facilities, which have historical, academic, and technological value, were selected from among entries submitted by the public.

Kinkasan Maru and engine control console on it