The drill was held on Tuesday, October 17, 2017, with the goal of raising company-wide safety awareness through the simulated experience of a serious marine incident. It was designed to ensure that the company can respond swiftly and appropriately in case of a serious marine incident, and maintain the timely flow of accurate information. MOL also strives to further sharpen its group-wide emergency response readiness through these regular exercises.

The main participants included MOL executives and representatives of relevant MOL divisions, who teamed up to organize an Emergency Control Headquarters, along with the ship management company, MOL Ship Management Co., Ltd.

Under the drill scenario, a fire occurred in the engine room on the car carrier, which was underway, and one crewmember, one of the firefighters, was missing. With its engine disabled, the vessel drifted into shallow water and scraped a reef, breaching the hull and causing fuel oil to leak into the sea. The breach also resulted in seawater flooding the cargo hold. To reconfirm processes such as reporting and communication that are critical in an emergency, the time frame of the drill spanned from the occurrence of the incident to a simulated press conference, and verified the company's capability to ensure smooth cooperation and information gathering among the vessel, ship management company, as well as concerned divisions and the Emergency Control Headquarters within MOL. In addition, based on information collected, the headquarters discussed responses to be taken as the shipowner and operator and reviewed the emergency response system, and then practiced responding to media inquiries at the simulated press conference. 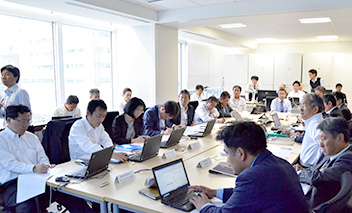 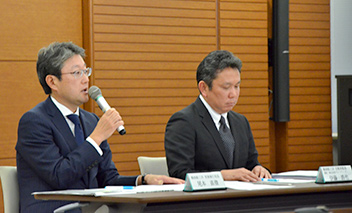 Scene of the simulated press conference