MOL Presents Long-Service Awards, Hosts Family Day for Filipino Seafarers
- Appreciation for Contributions of Seafarers and Support by Their Families -

Awards and recognition went to seafarers with 15 years of service aboard MOL-operated vessels, and a total of about 60 award recipients and their families attended. President & CEO Junichiro Ikeda expressed his appreciation to the recipients for their longstanding efforts to realize safe vessel operation, and added his message of expectation for them to keep on playing a key role in safe vessel operation going forward. Recipients commented with their resolution, "Safety is the main priority in MOL, making everyone have a sense of pride and respect. We, seafarers, wish to grow up along with the growth of the company."

Family Day was held in Manila, drawing about 3,500 seafarers and their families. President & CEO Ikeda expressed his gratitude for their support towards safe operations. He also introduced the group's shared values "MOL CHART," and urged the attendees to demonstrate "Teamwork" – the "T" in MOL CHART – as they strive together to enhance safe vessel operation. Attending families' comments included, "We look forward to the event every year, and feel that the company takes care of seafarers and their families too."

The MOL Group regularly conducts such programs in the Philippines and other countries that are home to seafarers, striving to provide a pleasant working environment while expressing appreciation for their contributions to the group's success. 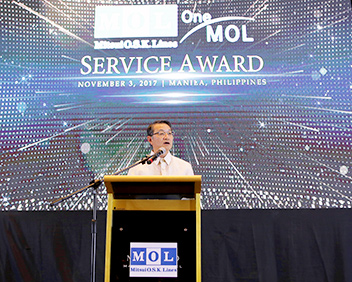 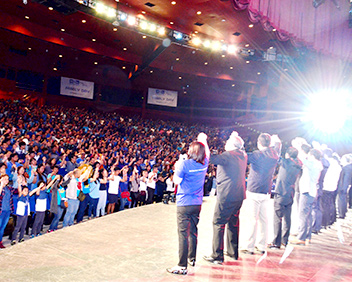