Like the flight data and cockpit voice recorders on airplanes, VDR records data on vessel movement (position, navigation speed, main engine rpm, and so on), voice communication on the bridge, image data on nautical instruments such as radar, and the Electronic Chart Display and Information System (ECDIS). An international treaty mandates that large-scale vessels and passenger ships that ply international waters be equipped with VDR, in order to analyze and identify the background and causes of marine incidents, based on data collected by the VDR prior to such incidents.

Benefits of the new network capability

MOL conducted the test with one of its operated vessels, and confirmed the following.

The network can receive and monitor VDR-collected information related to various nautical instruments and the main engine of the vessel, and determine the movement of the vessel on the nautical chart by transferring the data to ECDIS.

Past data recorded on VDR can be acquired ashore whenever needed by using satellite telecommunications.

How to use in the future

MOL continues to promote advanced support of safe operation and environment-friendly services, which are states in the "ISHIN NEXT - MOL SMART SHIP PROJECT -," announced in November 2016. MOL also aims to be the first company that comes to mind when customers are looking for a logistics business partner that fully utilizes ICT technology.

Flow to get VDR data from shore

Image of radar and ECDIS 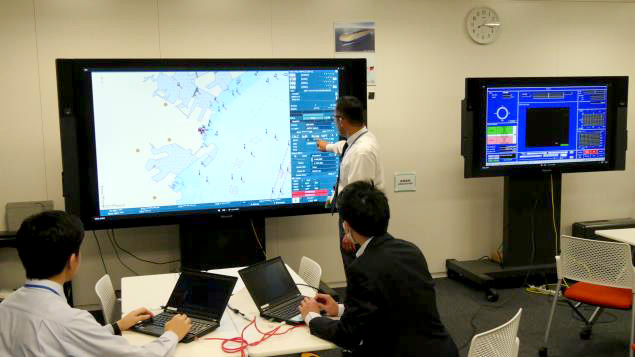 Image of using on shore