The three companies have moved ahead with this project and recently conducted a Hazard Identification Study (HAZID) (Note 1), and finished the basic design.

This is Japan's first joint acquisition by three companies - a shipping company, cargo owner, and shipbuilder - of an AIP for a vessel powered by LNG. The vessel design ensures sufficient cargo capacity without making the hull larger by installing the LNG fuel tank at the stern. In addition, the study is pursued based on installation of the tank cover with an eye toward preventing an onboard fire from spreading to the LNG fuel tank while streamlining inspection work.

As stricter standards on exhaust emissions from merchant vessels have taken effect around the world, LNG-which can significantly reduce not only SOx, but also CO2, which is a cause of global warming, and NOx, which is a cause of acid rain and so on-is expected to see wider use as vessel fuel. In addition to researching the feasibility of using LNG as fuel, MOL also strives to reduce its environmental impact, while providing safe, reliable transport services (Note 2). MOL will forge ahead with this cutting-edge coal carrier, which adopts expertise and technology gained through promotion of the R&D project "ISHIN NEXT - MOL Smart Ship Project" (Note 3). 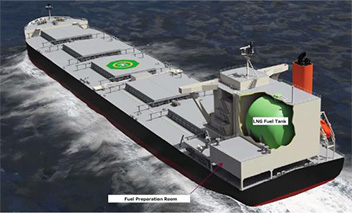 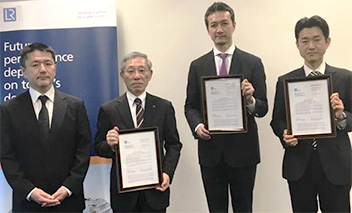 Scene of the certification reception