The drill was held on Friday, November 16, with the goal of raising company-wide safety awareness through the simulation of a serious marine incident. The drill was designed to demonstrate that the company can respond swiftly and appropriately in case of a serious marine incident and maintain the timely flow of accurate information. MOL also strives to further sharpen its group-wide emergency response readiness through these regular exercises.

Under the drill scenario, an LNG carrier collided with a fishing boat near the Akashi Kaikyo Bridge while attempting to evade another ship. The boat capsized, and the three crewmembers went overboard. One was rescued but was unconscious and in critical condition, two others were missing. The collision, which occurred in shallow water, left a hole in the bottom of the LNG carrier's hull, and seawater flooded the ballast tank. The vessel was anchored near the site, but the carrier's boil-off gas(*) treatment system malfunctioned, making it impossible to control the cargo tank pressure.

Upon receiving a report of the accident, MOL organized an Emergency Control Headquarters inside the company. To reconfirm processes such as reporting and communication that are critical in an emergency, the time frame of the drill spanned from the occurrence of the incident to a simulated press conference and verified the company's capability to ensure smooth cooperation and information gathering among the vessel, ship management company, concerned divisions, and the company's Emergency Control Headquarters. In addition, based on information collected, the headquarters discussed responses to be taken as the shipowner and operator, reviewed the emergency response system, and then practiced responding to media inquiries at the simulated press conference. 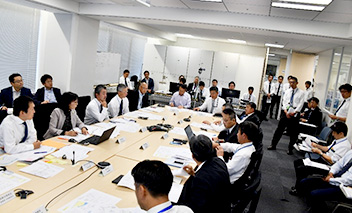 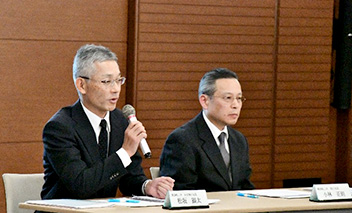