The company welcomed about 600 elementary and junior high school students and their family members, which was twice as much as the event last year, who were selected in an online application process. The guests boarded the huge vessel-measuring about 200m long, and after a welcome message from the captain on the bridge, they got to see and touch nautical instruments and binoculars while receiving explanations from the deck officers, and starting with a brief presentation about vessel engine and engineers' work in the lounge, people toured the Captain's room and crew cabin in the accommodation area, which were open to public for the tour. This gave them a close-up look at the seafarers' jobs and lifestyles onboard. They watched a demonstration of cars being loaded into the cargo hold and saw a "deck lifter", which move the liftable decks up and down to accommodate vehicles of different heights. Just for fun, they experienced the operation of radio-controlled ships in a pool of water and enjoyed crafting their own model ships with milk cartons.

At the cruise ship terminal, MOL also provided a virtual reality (VR) experience of boarding a vessel, a craft workshop session where visitors made paper replicas of the ferry, and a workshop about the use of international maritime signal flags. Students, family members, and many other people took part in these events.

About 150 MOL Group staff members were on hand to assist during the event, and heard positive and enthusiastic comments from the youngsters, such as "It was enjoyable and impressive," "I was amazed at the spaciousness onboard," and "Women serving on ships can count on a lot of support."

The MOL Group as a team continues to promote activities that build the public's familiarity with ships and the importance of the ocean shipping industry to everyday life in Japan, with a special focus on children and students. 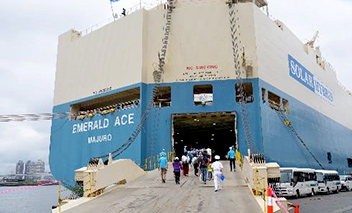 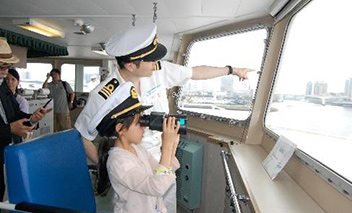 An officer introduces a student to bridge operations. 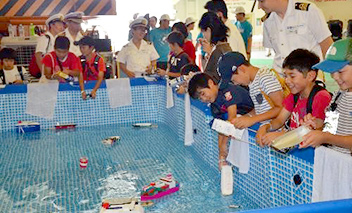 Students operate radio-controlled ships and sail model ships they made out of used milk cartons. 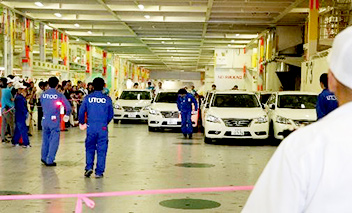 (*) The ocean supports Japanese lifestyles in various ways, and it sometimes provides relaxing, excitement, and inspiration. The Umi-to-Nippon (The Ocean and Japan) Project, a joint effort by the Cabinet Office's Headquarters for Ocean Policy, the Ministry of Land, Infrastructure, Transport and Tourism, and The Nippon Foundation, aims to build awareness of the current status of the ocean and the deterioration of the marine environment as personal issues, and renew the bonds between Japanese people, especially children and young people, and the ocean, and pass on clean and beautiful oceans to the next generation.