The drill was held on Thursday, October 10, with the goal of raising company-wide safety awareness through the simulation of a serious marine incident. The drill was designed to demonstrate that the company can respond swiftly and appropriately in case of a serious marine incident and maintain the timely flow of accurate information. MOL also strives to further sharpen its group-wide emergency response readiness through these regular exercises.

Under the drill scenario, a fire broke out on the deck of an MOL-owned containership, while underway off Chubu International Airport, bound for the Port of Nagoya. Then, an explosion occurred during firefighting operations. One of the ship's crewmembers was injured while fighting the fire and was reported to be in critical condition. In addition, seven containers went overboard due to the explosion, and a colored liquid spilled from some of them into the sea.

Upon receiving a report of the incident, MOL organized an Emergency Control Headquarters inside the company. To reconfirm processes such as reporting and communication that are critical in an emergency, the time frame of the drill spanned from the occurrence of the incident to a simulated press conference and verified the company's capability to ensure smooth cooperation and information-gathering among the vessel, ship management company, the charterer (ONE), business divisions involved, and the company's Emergency Control Headquarters. In addition, based on information collected, the headquarters discussed responses to be taken by the shipowner and charterer, reviewed the emergency response system, and then practiced responding to media inquiries at the simulated press conference. 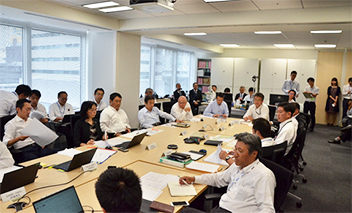 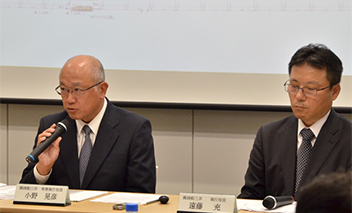