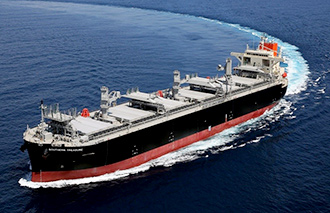 The name of the vessel "SOUTHERN TREASURE" is derived from its cargo, wood chips, which are produced in Chile, South Africa, Australia, Vietnam, and other Southern countries, and represent "treasure" delivered to Hokuetsu Corporation. It also calls to mind the idea of a "treasure ship."

MOL continually strives to offer safe and stable wood chip transport service for customers including paper manufacturers around the world while caring for the environment, and contribute to a stable supply of resources.

[ Outline of the vessel ]

(Note 2)
Propeller Boss Cap Fins (PBCF) is an energy-saving system to improve propeller efficiency and reduce vessel fuel consumption, and was developed by a group of companies including MOL.