In addition, MOL, Mitsubishi Shipbuilding, and Kansai Electric Power Co., Inc. (President: Takashi Morimoto; Headquarters: Kita-ku, Osaka-shi) have signed a Memorandum of Understanding (MoU) to jointly conduct a study to introduce the ammonia FSRU as a major step in adopting ammonia as a decarbonized energy.

Image: Ammonia transport vessel on the left and ammonia FSRU on the right

Currently, the maritime transport volume of ammonia is limited as it is mainly used as a raw material for fertilizer. However, it is drawing global attention as a next-generation clean energy source that emits no carbon dioxide (CO2) during combustion. Strategic moves to adopt ammonia as an alternative fuel are underway around the world.

Conventionally, FSRUs are used as floating facilities that receive LNG offshore for storage, regasify it onboard, and send it to shore. It offers the advantages of shorter construction time and lower costs in comparison to construction of onshore storage tanks and regasification plants. FSRUs are expected to speed up the adoption of ammonia fuel and contribute to its wider use as a lower-environmental-impact next-generation fuel.

In this concept study, the team examined specifications of several cases with different conditions such as tank size and regasification method to meet a broad range of needs. In addition, the team developed a design concept of a lower environmental impact FSRU that would be powered by electricity generated with ammonia fuel.

MOL, Mitsubishi Shipbuilding, and Kansai Electric Power are continuing their study aimed at introducing ammonia FSRUs in various regions of the world.

In "MOL Group Environmental Vision 2.1" (Figure 1) MOL established the following medium-to-long-term target: "With concerted effort throughout the Group, achieve net zero GHG emissions by 2050," and development of ammonia-powered vessels, ammonia bunkering vessels, and an ammonia transport business will play a key role in achieving that target.

At the same time, MOL continually contributes to customers' efforts toward decarbonization and commercialization of environmental technologies and the realization of a carbon-neutral society. 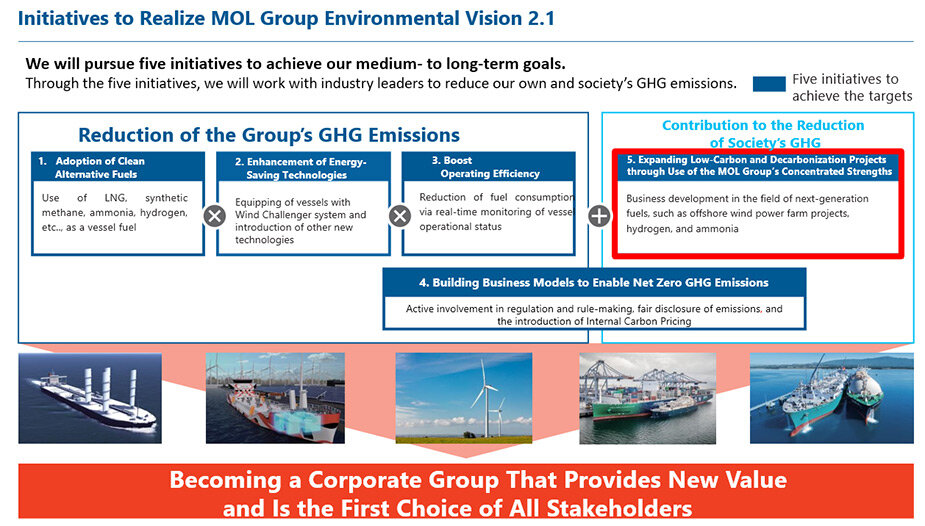