President Koichi Muto delivers a speech at the naming ceremony

TOKYO-Mitsui O.S.K. Lines, Ltd. (MOL; President: Koichi Muto) today announced the delivery of the LNG carrier Papua by Hudong-Zhonghua Shipbuilding (Group) Co., Ltd. (Hudong) on January 30. The Papua is the first in a series of four ships to be built by Hudong to provide LNG transportation for the PNG LNG project in Papua New Guinea and the Gorgon Jansz LNG project in Australia. MOL will operate the Papua under a long-term charter contract for the PNG LNG project operated by ExxonMobil.

In January 2011, MOL assigned technical experts to the shipyard in China and created a shipbuilding supervision team made up of multinational staff, mostly Chinese and Japanese, to ensure the safe and high-quality construction of these LNG carriers. Since then, the company has been actively involved in the project to build these LNG carriers in China – a first for an overseas shipping company – in cooperation with ExxonMobil.

The ship was named Papua by the First Lady of Papua New Guinea, Mrs. Lynda Babao O'Neill, in the naming ceremony which was held at Hudong shipyard on January 8.

The project scope is for the transportation of LNG for China's major energy company, China Petroleum & Chemical Corporation (SINOPEC). The vessel is co-owned by a major Chinese ship-owner, China Shipping (Group) Company and SINOPEC, meaning there is a very substantial Chinese involvement in the project.

MOL's strong and successful relationship with its Chinese partners in this project led to an initiative to build a further six new LNG carriers for SINOPEC, in which MOL has participated since April 2013. These ships are now under construction at Hudong. A total of 10 vessels, including the four serving the PNG LNG and Gorgon Jansz projects, will be completed by 2017. Completion of the first vessel marks a significant milestone.

MOL believes that the experience gained in global cooperation through these projects and the success it has had working with its Chinese partners will spur future growth of its business globally.

In recent years MOL has forged ahead with its investment in management resources for businesses that will contribute to stable long-term profits, helping the company achieve "solid growth through innovative changes," as set forth in the midterm management plan STEER FOR 2020. Its vision is for the company to increase its LNG carrier fleet from the current 66 vessels to 120 by 2020, including the 10 vessels serving the projects in China. In the LNG transport field, which is positioned for robust growth underpinned by the U.S. shale gas revolution, MOL has steadily won new contracts in North America and other regions. In December 2014, drawing on its abundant experience and know-how with both LNG and LPG carriers, the company successfully participated in a transport project involving the world's first large-scale ethane carrier. 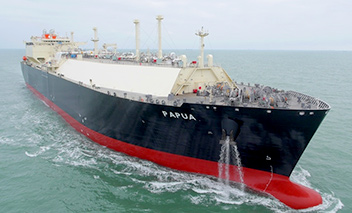 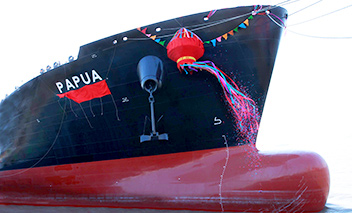 Papua at the naming ceremony