TOKYO-Mitsui O.S.K. Lines, Ltd. (MOL; President: Koichi Muto) today announced that MOL cooperated in the transport of the "Tachinepta" float (*1) featured in the Samba Carnival (*2) that began in Sao Paulo, Brazil on February 13.

Components of the float, weighing about 5 tons in all, were placed into 15 containers and loaded aboard an MOL-operated containership. The vessel departed the Port of Shimizu on November 25, 2014, and arrived at Santos, Brazil on January 7. The Tachinepta was then assembled by craftspeople who traveled to the site from Goshogawara City, Aomori Prefecture, Japan. When the magnificent float was completed for the opening of the Carnival on February 13, it measured more than 14m high.

The year 2015 marks the 120th anniversary for signing the Treaty of Amity, Commerce and Navigation between Japan and Brazil. Thanks to the support of Japan's Ministry of Foreign Affairs, the Japan Tourism Agency, and other agencies, the Tachinepta participated in the Samba Carnival under a project called "Stand up, Tohoku! Thank you, Brazil!" (*3). MOL was proud to play a role in this project and help with the transport of the float.

The Tachinepta was one of five floats from the "Aguia de Ouro"(*4) team in the first division league of the Carnival in Sao Paulo. It moved gracefully through the venue, Sambódromo Anhembi with about 3,500 Brazilian dancers, which is the largest among the teams, along other samba floats. MOL subsidiary, MOL (Brasil) Ltda. employees also joined in the parade, bringing dancers and audiences together to boost the festive atmosphere.

MOL has a deep relationship with Brazil, with a history dating back to opening of South America East Coast route by its predecessor Osaka Shosen Kaisha (OSK Line) in 1916. MOL's relationship with Brazil has become even more important in recent years, not only for containership service and iron ore transport, but for offshore business as well. What's more, MOL wanted to cooperate in this project as a way to express its appreciation for Brazil's support in the wake of the Great East Japan Earthquake and tsunami, to promote reconstruction of the Tohoku region devastated by the disaster, and to further promote exchange between Japan and Brazil.

*1:Tachinepta
It was created in Goshogawara City, Aomori Prefecture, with hopes for a full recovery from the 2011 Great East Japan Earthquake and tsunami. The design represents a tradition of Kashima-daimyojin (god of world rectification) harnesses Jishin-namazu (a giant catfish that causes earthquakes).

*2:Samba Carnival
It is held in Sao Paulo in February every year, equaling the spectacle held in Rio de Janeiro. The Sao Paulo event was held from February 13 to 14, 2015, with 14 teams participating.

*4:Aguia de Ouro
A long-standing, prestigious samba team established in 1976. It is popular team that is invited to perform at the annual Asakusa Samba Carnival in Japan. 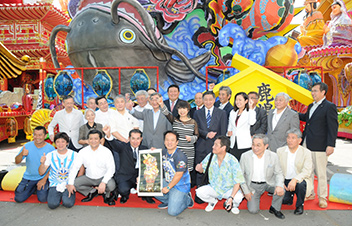 A group shot of the project members in front of the completed Tachinepta float:
Fourth from left in the second row is Goshogawara City Mayor Masatoshi Hirayama; fifth is the world-famous fashion designer Junko Koshino, and sixth is MOL (Brasil) President Taku Kadooka 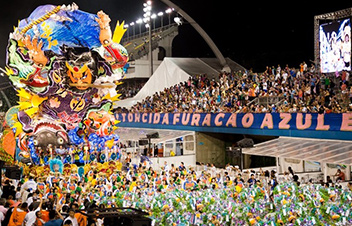 Marching with Tachinepta in Carnival