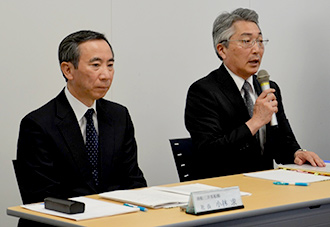 TOKYO - Mitsui O.S.K. Lines, Ltd. (MOL; President: Koichi Muto) today announced that, in cooperation with the Japan's 7th Regional Coast Guard Headquarters, the company conducted a tabletop drill based on a scenario in which the cruise ship Nippon Maru, operated by its group company, Mitsui O.S.K. Passenger Line, Ltd. (MOPAS; President: Motomu Kobayashi), collided with another containership while under way on the Kanmon passage. The scenario also included injuries to some on board and flooding of the Nippon Maru's engine room.

The drill was held on Wednesday, May 13, 2015, with the goal of strengthening MOL's emergency response structure, which is based on the MOL Group Corporate Principles - protecting the environment by maintaining strict, safe operation and navigation standards. The exercise was also designed to ensure the necessary response and smooth, precise communications that are so critical in the event of such a serious incident involving a MOPAS-operated vessel.

Taking part in the drill along with the 7th Regional Coast Guard Headquarters, MOPAS, executives from the MOL Head Office including President Muto and officials from relevant divisions, which teamed up to organize an Emergency Control Headquarters.

Under the drill scenario, the Nippon Maru collided with an ocean-going containership while under way on the route of Kanmon passage to the Port of Kobe after departing from the Port of Hakata. Some crewmembers and passengers were injured in the collision, which also caused flooding in the engine room.

Immediately after receiving an initial report from the Nippon Maru to the Coast Guard, MOL and MOPAS established Emergency Control Headquarters in each office, began first-response measures and procedures - information gathering, communications among the concerned parties, issuing directions and instructions to the vessel, and holding a joint mock press conference.

The company continues to sharpen its group-wide emergency response readiness throughout the MOL Group and its fleet, by sharing know-how accumulated in these emergency tabletop drills, and by sharing opportunities for improvement discovered during this exercise.